Having undertaken extensive research Graham was able to identify a suitable Hostel in Elterwater which was cheap, had both male and female sleeping areas, a dry room, a full English breakfast, close to a pub, and central to a wide range of rivers. The last criteria obviously being the most important!
Travel arrangements in place we headed down to the Lake District as we experienced the tail of Storm Freya. Sandy’s wee van did well to make it up a 25% gradient hill fully laden and Sandy did well manoeuvring all the tight corners in the dark. 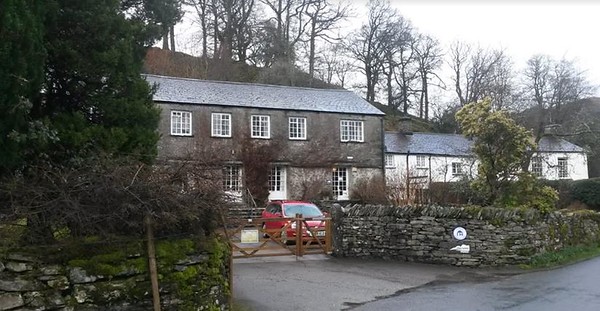 Having dumped our kit in the prison…..sorry hostel….we headed down to the pub to wait on Graham and Campbell.

After a good nights sleep (in the ladies dorm) and a noisy sleep in the boys room we stocked up on energy reserves with a very tasty cooked breakfast.
Following a most excellent exercise in skilful (tandem) navigation we arrived at our put-in point on the River Duddon. Noted as one of the best rivers in the Lake District – good choice Graham! Guess that wasn’t a lucky choice either.
Handy hit picked up along the way – Rainchasers has an OS map, if you’re designated navigator.

Initially we were going to run the lower section – Ulpha Bridge to Duddon Bridge. However feeling a bit adventurous we decided to extend the decent by adding on the middle section too (Halls Bridge to Ulpha Bridge). Both sections were a range of good Grade 3 and lower end Grade 4.

Derek as our glorious leader through about 9k of Grade 3 / 4 with fairly continuous rapids. We warmed up with a straighforward 2k and a slide down a small weir. After that I took a took a swim in a slow and controlled manner (all kit in hand) at the first rapid (Jill’s Folly, G4). Followed by quick recovery aided by Sandy and Derek. The next rapid was a series of steps into Ulpha Gorge (G4) which put all that eddie hopping practice to good use. All drops were skilfully navigated. Although Campbell decided to practice his roll on an unsuspecting stopper or hole – we’re not exactly too sure what happened as we were celebrating another successful rapid negotiation.

Through the gorge we boulder rapid and punched through the stopper at the bottom then headed down to Ulpha Bridge through a graveyard section. The first section was definitely the most interesting but the second section didn’t disappoint.

Most notable was Duddon Hall Falls which dropped under Rawfold Bridge – this was awesome! There was rapid inspection, line discussion, a lot of active paddling and concentration, combined with a bit of luck on my part. I can’t actually believe I stayed afloat. Almost straight after we came up against a weir with a pretty big tow-back which was portaged. The last rapid looked worse that it was, it was really just a bouldery G3 rapid.
Paddling complete we had a competition to see how many kayaks Sandy’s roof rack could handle before point of collapse. I’m glad to say we managed all 5 boats on a carrier designed for 2. 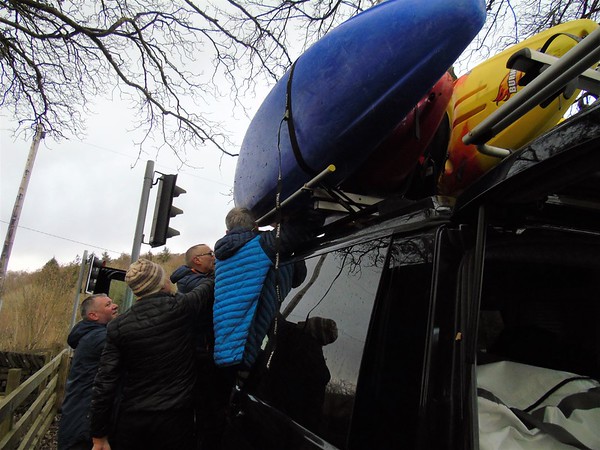 We headed back through Hardknott Pass taking in the amazing scenery.

In the evening we decided to try out the posh restaurant on Campbell’s recommendation but there was no room at the inn. Which was probably just as well at £10 for a white wine and soda! But the lounge was very nice.

After a refresher we headed back down to our good old, rustic, Britannia Inn to feast on their supersized meals.

The morning of Day 2 was a little more sedate and after breakfast we loaded up and headed off for the final river run – the Kent a full on Grade 4.
After a team talk in the van we decided, due to the very heavy snowfall and near freezing temperature, it was perhaps not the best conditions to paddle in. Although Graham was the last man standing and still up for some endurance paddling. Five minutes later we were on route to Gretna Green for lunch!
Thank you for all for a top trip.

White water kayak event. This will be a peer trip as Sandy is unavailable!
Nov
9
Tue
7:30 pm Pool Session Autumn 2021 @ Clydebank Leisure Centre
Pool Session Autumn 2021 @ Clydebank Leisure Centre
Nov 9 @ 7:30 pm – 9:00 pm
Our pool sessions are back. Please note the new start times which are when we would hope paddlers can get afloat so please allow time for changing etc. Intromediate, Family and Youth Session: 7.30-8.15pm Everyone[...]
View Calendar
Add